My first acrylic on canvass or why I like to paint

As a preteen and adolescent, I drew and painted pictures with chalk and with pastel. As an adult I've painted with watercolors and used charcoal and pencil. A couple months ago, S and I took a one night "class" on painting with acrylics. It was really more of a social night out. Everyone in class followed the teacher's instructions and painted the same picture. We had stuffed mushrooms and martinis and wine and cookies and cake. At the end of the evening, the teacher took our photos with our pictures and put us on her mailing list for future such events. It was fun and totally relaxing. But I didn't get anything I wanted to call my painting out of it.

I had been thinking about painting with acrylics for some time. Not because I'm a visual artist. I'm not. My father was, but I didn't inherit that particular gene. I'd been thinking about it because I enjoy painting, and when I was working regularly with watercolors, it gave me a way to relax and forget whatever was stressing me. I wanted to try acrylics because the stuff I'd read about working with them sounded interesting.

My father had used them, but that's because he used everything, even some media he invented himself. When he painted, though, he generally preferred oils.

The one night class, at least, gave me some basics about handling acrylics and how to start working with them. So when we went to California this past summer, S bought me a basic set of acrylics and a few canvasses for my birthday. I thought about using them there, but didn't. When I got home, though, I selected a few photos I'd taken to use as subjects while I learned about the medium. 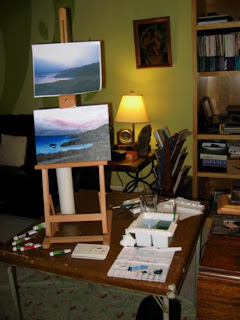 I call it Path at Pine Cove, Twilight. I'm probably not going to frame it and hang it, but I'm not unhappy with it.

Since the photo I painted from is a twilight shot, the foreground is supposed to be dark. But the flash on the camera washed out the color. So I tried to take the picture without the flash and got (another drum roll please )....................... 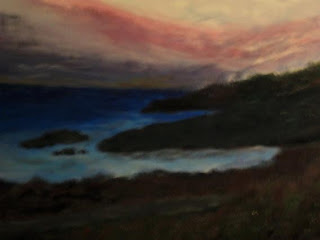 If you look at the photo on the easel above the picture, you'll see this is actually the way I envisioned the picture turning out -- wonderful what digital photography will do to your work, but it isn't an accurate representation of what I'd done. So I took another photo. This time I got (you know, drum roll)............................ 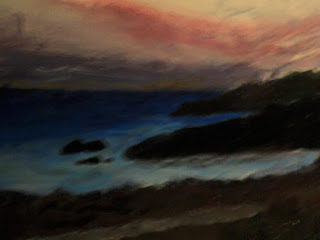 ....the picture I wish I had painted!

I like to paint because I'm not a painter. There is no pressure. I don't have to be good. If I'm going to get something out of it I need to try to be good. But there's nobody standing over me saying I should do this and not do that.

My father would do that when I was a teenager and later when I'd show him some of the drawings I'd done as an adult. But that's what fathers do.

And there's no gate keeper judging me in terms of whether I get paid or whether anybody else gets to see my work or even whether I'll get more work from them. So there's none of the pressure I feel -- regardless of how much I like my work -- as a professional or a poet. When I paint, it's my time for me. It relaxes me, and that's good for my blood pressure and my soul.

Just me, thinking about what I see.

But something more happened with this painting. Something I hadn't expected.

When I work with watercolor, I do a painting, sometimes two paintings, in an evening--most of which paintings I don't keep. But it took me weeks to do this first acrylic. That's partly because I wasn't sure all the time what to do next and partly because of time. It was also partly because I wanted to think about what I was doing and about the mistakes I made so I could learn from this experience.

My "studio" is set up in a section of my office, which occupies the entire third floor of our house. The table where the easel sits is about fifteen feet away from my desk. The whole time I was painting the picture, the canvass stayed where, as I worked during the day, I could simply turn and look at it any time I wanted. I also saw it whether I wanted to or not whenever I'd get up from the desk or simply turn in my chair to think about the next paragraph or prospecting letter.

Every time I saw the picture, I saw something different. The mistakes I made, I would stare at for days. I was clueless how to fix them. But when I would figure it out, just by looking at the painting so often I would wonder whether I could mix the colors again so that the correction would fit with what's there. Then, I would simply look at the painting and know what to do. Sometimes I'd get up from my desk right then and spend maybe 10 minutes painting, clean up, and go back to my desk and back to work.

A couple of days ago, I figured out how to do a key part of the picture I was having trouble with. At dinner that evening, I asked S if she wanted to see what I was doing. When she said yes, I went up and brought the painting down. I was excited and started explaining what I'd done that day but soon began chronicling the entire process I'd gone through. I'd point to something in the picture and talk about how I did it or about a mistake I'd made and what I'd done to fix it or how the mistake had actually worked out better than what I had intended to do. And I'd explain what I had learned from that and what I would try to do with the next picture.

As I explained these things I realized something. I was looking at the picture the way my father looked at pictures -- his own and his students. I was solving problems in one of two ways. I was either calling on the advice and critiques he had given me over the years, or I was solving them with what I remember seeing him do or hearing him talk about doing while I watched him paint.


Sure. My painting is for me, and I'm learning about painting and about seeing. But a big part of why I like it is I'm also learning about my father's painting.
Posted by The Grandpa at 5:03 PM