Published in A Matter of Mind, Foothills Publishing, 2004.
© copyright 2004, 2009 the Grandpa at The Word Mechanic Blog.
All rights reserved.
Some thoughts about other things 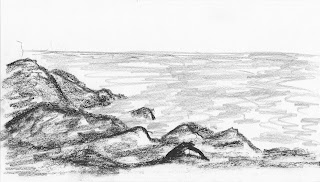 My father was an artist. He used to tell me that anyone could draw. Although, he did manage to let me know that he didn't think I did a very good job at it. He also wasn't very enthusiastic about my poetry when I was a teenager.
My youngest brother and my second son got his talent.
I did enter art work in the fair when I was a kid. I got my share of ribbons. But I never felt like I really understood what my father did when he painted, or worked with clay, or did pieces in enamel.
As a teenager, I liked to work with chalk and also oil pastels. I liked the feel of using my fingers to blend the colors in a sky and on a lake.
I drew pictures once in a while, mainly sketches and doodles, after I became an adult. But I didn't get serious about it again -- and I'm really stretching it to say serious -- until we moved to New Jersey in 2000. Then I started working with watercolors. They were crude, but S liked them and started buying me more paints, pencils, sketch pads. And I kept it up after we moved to Birmingham, Alabama, a year and a half later. I did more pencil sketches than anything. I like to draw.
Two years later we moved back up to Massachusetts, and I lost the incentive. So the art activity (and the photography I'd been getting more and more into) dropped way off. Now that we live in Atlanta, I'm interested in doing more art.
When I was young, I never thought my father was very successful at teaching me to draw, which was strange because for years he taught art to kids in his home on Saturdays, and a number of them went on eventually to study art and take it up as a career. But now when I do pick up a drawing pencil, I can hear him standing behind me telling me I wasn't doing something right and know that I did, after all, learn something.
If you haven't visited Rene at Not the Rockefellers, you should. I feel like I learn something about writing when I read her blog. And I really like her mission statement: "To inspire and encourage others to write freely." It's followed by a wonderful quote from Martha Graham. Check it out at the top of the left hand sidebar.