(The title refers to the poem that comes after after the note. The note is to the people in the Blogosphere, not Caroline.)

Note: I'm feeling a little guilty because I haven't been able to spend as much time as I would like in the blogosphere for a couple of weeks now. The first week I was on vacation. This one I'm trying to catch up on my work after being on vacation. The good news is I'm almost caught up and I'll be able to respond to people's comments again pretty soon. Just don't give up on me. You guys leave the greatest comments. They make me feel good. (It's great to feel that way without having to use some foreign substance.)

One more thing. We had a visitor at our house a couple days before Christmas. He was in the neighborhood and just wanted to stop by and say "hey" because he's often too busy this time of year. But it was good to see my old friend Nick and get caught up on what he's been doing. 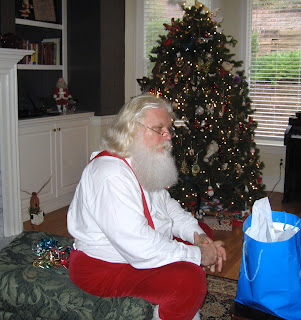 Letters to Caroline
1.
We've been a month without snow.
Last month, it seemed it would never stop;
now the ground in spots is bare.

Since we've stopped talking, we've lived side by side,
lying in the same bed without touching,
so well we've learned the impenetrable zones,
even in our sleep.

2.
Only a month of winter left,
but then no real spring,
only weeks of mud
and unfulfilled promise.

I remember the cat standing at your feet
in front of the couch
while you read the newspaper. If you'd put the page
down and let it,
it would have leaped on your lap. It stood watching you,
wanting, as cats want,
to be touched, then gave up and lay beside
the rocker.

3.
If I asked about him, would you tell me he listens?
That he leaves messages at your terminal?
That you like the way he laughs?

And that he doesn't need and so
makes you young again?

4.
Two suns in our morning skies;
five days in parallel worlds,
we expand and contract, knowing neither
what blue nor gray winds fill
the other's days.

Then at night, I cruise the space between,
seeking light from familiar stars that inhabit both
our skies: Evidence of love we can both remember.

5.
The usually clear walk was strewn with pebbles
thrown up by the tide. You pointed it out
as we looked for words to break the silence.

Kids playing with kites ran over the rocks
at Odiorne Point, through the winds that blew in along the shore
and mastered the land in a way the waves
only pretended to do.

But it was the waves, Caroline,
charging, pounding, I felt rip my heart.

Low tide and no boats.
We could see the Isles of Shoals.
We could hear the waves.

Originally published in A Matter of Mind, Foothills Publishing, 2004.
© copyright 2004, 2009 the Grandpa at The Word Mechanic Blog.
All rights reserved.